Council considered one submission received on the Representation Review at a hearing on the 16th October, 2018. As a result of that meeting no changes were made to the Initial (Draft) Proposal. You can read the report for that agenda and minutes below:

The Final Proposal for the Representation Review was advertised on the 20th October 2018, with any appeals closing on the 20th November 2018.

Any person who made a submission on the Council’s initial proposal may lodge an appeal against the Council’s decision. An appeal must relate to the matters raised in that person’s submission.

Timaru District Council is reviewing its representation arrangements prior to the local body elections in 2019 and would like to know what you think about the proposal. It has now decided on an initial (draft) proposal for consultation with the community. If you would like to submit on the proposal please send your comments to the Council by 5pm, Monday 17 September 2018.

In summary, the initial (draft) proposal is:

The maps below show the boundaries of these areas. There are no changes to the existing boundaries. 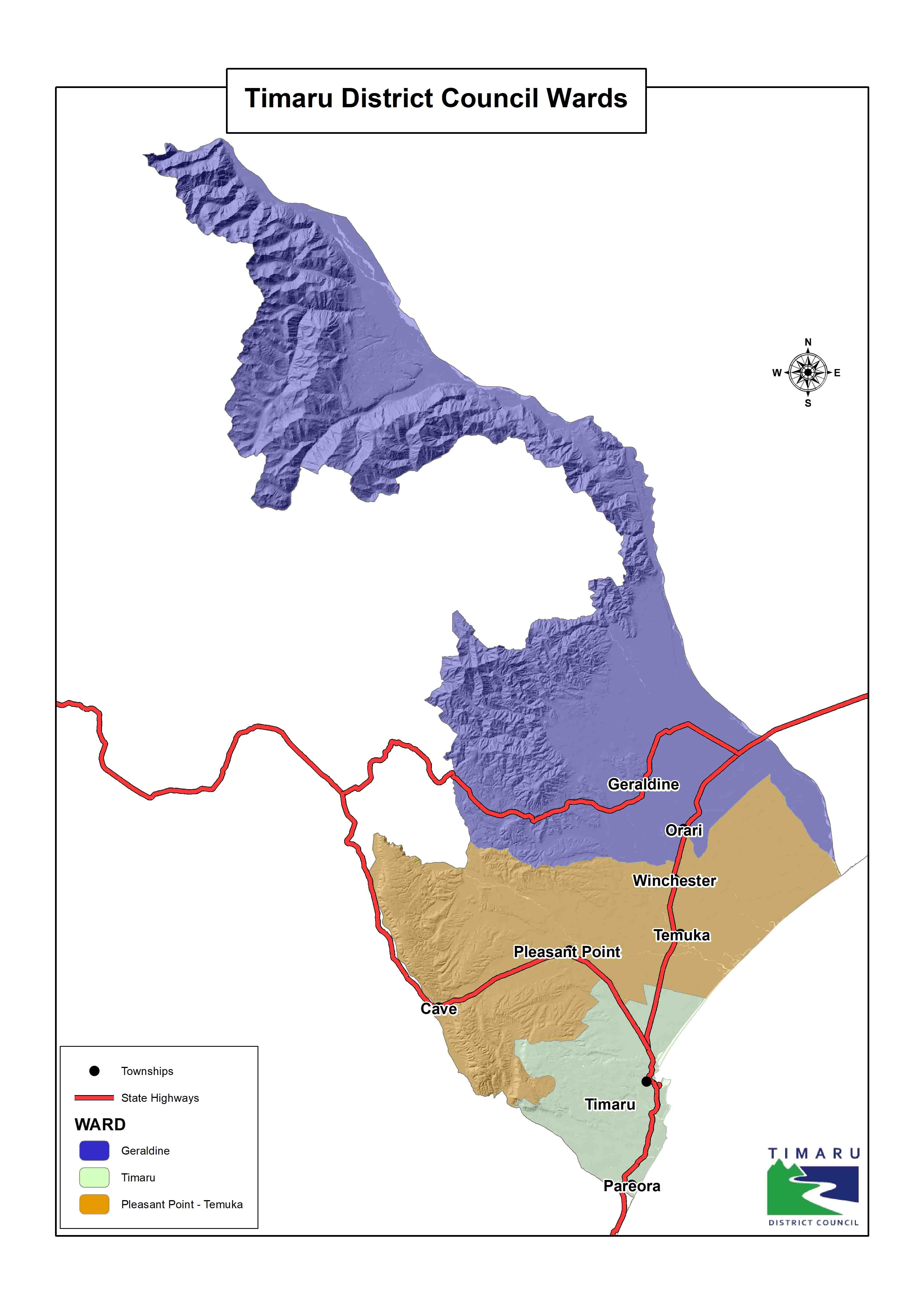 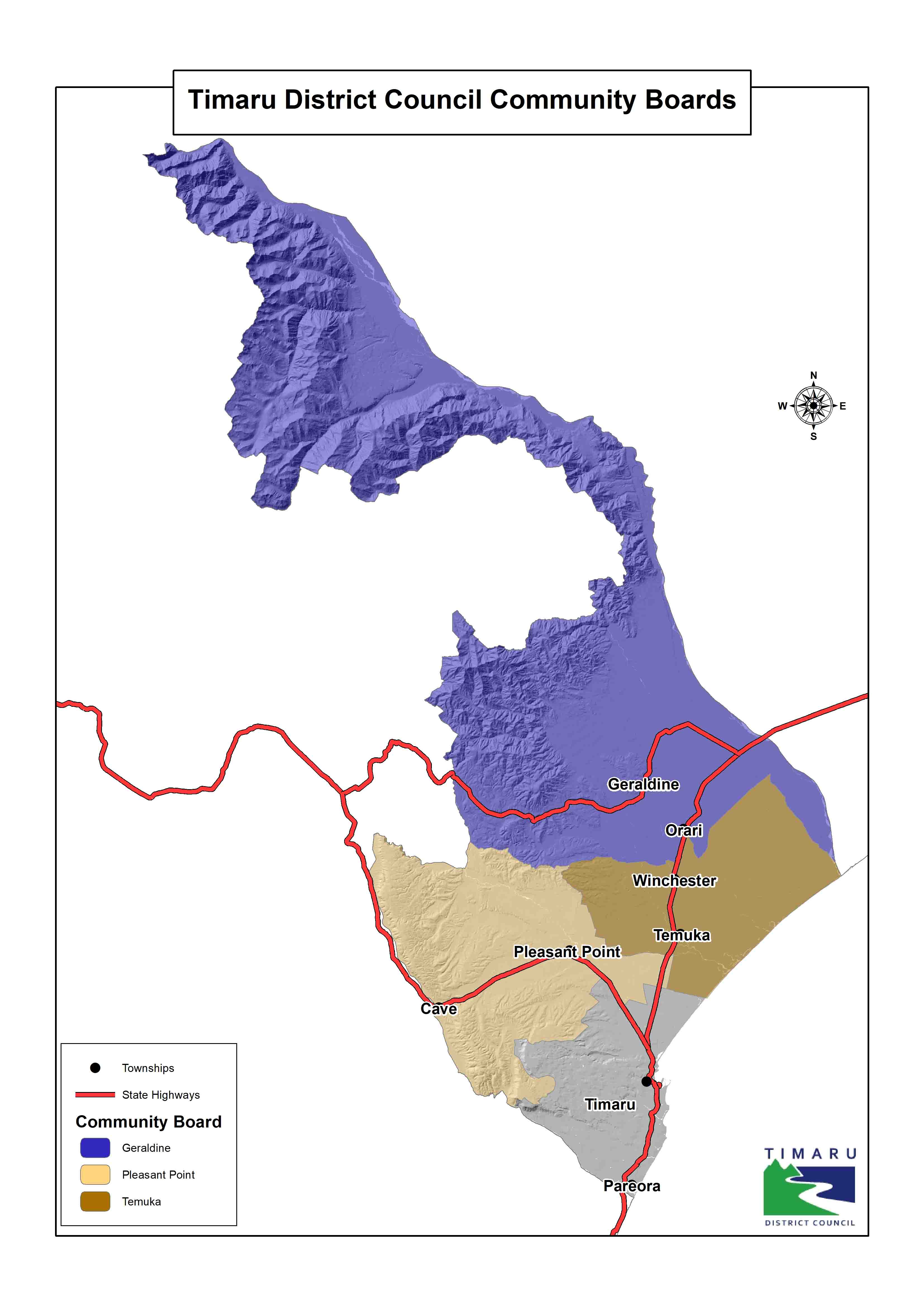 Use the tool below to find out which ward or community board you are in:

Find out where you can vote

The Initial Proposal public notice, including reasons for the proposed changes can be viewed below:

The summary document below includes the Initial Proposal details and a summary of the process to date, including maps. This is also available at council offices and service centres.

How to have your say

Please note your submission will be available to the public and media as it will be part of the Council’s decision-making process. If you need any assistance, please contact Council at (03) 687 7200.

Late submissions will not be considered

Representation Reviews are carried out once every six years under the Local Electoral Act. They require the Council to consider its electoral arrangements, including:

Where a ward system is selected, the +/- 10% rule applies. This means that for each ward a Councillor must represent the same number of people, plus or minus 10%. The current review is based on the following population numbers:

How have we carried out the Representation Review Process this time?

For this review round, Community Boards have considered a Discussion Document and Council have workshopped options prior to confirming this decision. Background papers and reports can be found below.

Geraldine Community Board Agenda/Minutes - 30 May 2018

Pleasant Point Community Board Agenda/Minutes - 29 May 2018

Temuka Community Board Agenda/Minutes - 28 May 2018

How has this changed representation arrangements?

There are no changes proposed to current representation arrangements.

Why has the Council decided there should be no changes?

The Council have decided on no changes to the current representation arrangements for the following reasons:

What happens once submissions close?

What’s the rest of the process involve?

The rest of the Representation Review 2018 process is summarised below:

If I don’t agree with the final decision of Council in October can I appeal or object to the decision?

If it goes to the Local Government Commission, how do they treat it?

What about having a Māori ward?

Under existing legislation the comparatively low Māori population in the district means this option is not currently valid in Timaru District.

Doesn’t having more elected members mean ratepayers would have to pay more because councillors would be paid more?

Central government’s Remuneration Authority sets the level of remuneration for each individual position. We don’t know if the number of Councillors affects this decision.

Isn’t an even number of Councillors a problem in making decisions?

Many Council decisions are made by consensus. In the event where there is a ‘split vote’ (e.g. 5-5), the Mayor has the option to use a casting vote as part of the democratic process. An even number of Councillors might increase the likelihood of this occurring more regularly.

With a mixed system, could a candidate stand for both an ‘at large’ and ward position?

No. Electoral legislation only allows a Council candidate to stand either at large or in a ward.

Don’t all Councillors represent the District?

Absolutely. Even if a Councillor is elected in a ward, they are obligated by law to take a district-wide perspective on all issues being discussed and decided by the Council.

How is the Mayor elected?

The Mayor is required by legislation to be elected at large.

When are the next local government elections?

The next local government elections will be held on Saturday 12 October 2019.

What about changing the voting system?

The Council have agreed to retain the First Past The Post (FPP) for the 2019 elections. The review does not deal with this issue.

The Local Government Commission have produced guidelines for representation reviews which are included below.