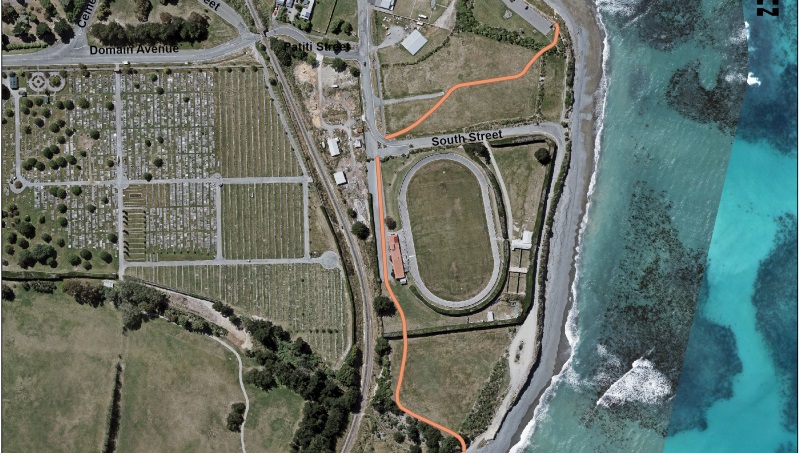 The Patiti Point surfers’ access path has been closed to all users after cracks appeared on the former road carriageway, with alternative pedestrian and bike access to Otipua beach now being provided through the Caledonian Sports Grounds.

Council has been undertaking regular safety checks due to the significant and rapid erosion at the path over the past short while.

Land Transport Manager, Andrew Dixon said that the check this week had shown a significant crack has recently formed on the affected pathway.

“The crack may mean that another 2.5-3 meters cliff could fall at any time without warning, as has previously happened, so for safety reasons the track is now completely closed for vehicles, cycles and foot traffic,” he said.

“There are existing mesh fences alongside the cliff, and more barrier and warning fences are being installed to block the at risk areas.

“People should not cross these barriers. If they do so they are putting themselves at risk of serious injury, and any attempts to move or vandalise the fencing is putting other people at risk too.

“We are also advising against walking under or near the cliff face on the beach as it can suddenly collapse without warning.

“Several large warning signs are put up at different locations where people will need to walk past to access the beach, so that people should not miss the message.”

Council’s Parks and Recreation Manager Bill Steans said that there is a new alternative route to the beach through the Caledonian Sports Grounds.

“The new route is mainly a gravel track with a thin top layer of fine crusher dust which provides a good surface for mountain bikes and for walking on.” Bill said.

“It goes from the seaward end of the Patiti Point carpark to the main entrance of the Caledonian Ground. The route cuts through the Macrocarpa hedge before descending to the mouth of Saltwater Creek and the northern end of Otipua Beach.”

Parking is available along South Street up to the barrier.